A gaming world where fantasy meets steampunk on steroids! 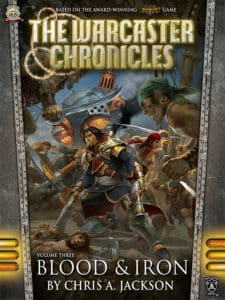 Warcaster. Mutineer. Pirate. Captain Phinneus Shae is a man of many titles—all of them could get him killed . . .

When the crew of the Talion is stricken by a mysterious plague, Captain Shae goes ashore on a small island to find medicinal plants. However, Mercarian League mercenaries ambush him, and their ships, fast and deadly pirate hunters, close in on the Talion.

In a desperate bid to outrun or outgun the Mercarian vessels, the Talion takes to open waters. But the pirate hunters may be the least of Shae’s worries: an infamous assassin, the sniper known only as the Ghostmaker, has been contracted to kill Shae and collect old debts of Blood & Iron.

Trace the origins of one of the most feared members of the pirate ship Talion, the sawbones and ship’s cook known as Doc Killingsworth, in Flesh & Bone,  my short story in the Iron Kingdoms anthology Called to Battle, Volume Two. 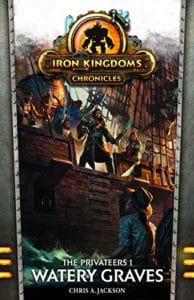 Treasure for the Taking

Unaware of the forces marshaled against him, Captain Phinneus Shae and the crew of the Talion are headed into uncharted waters. With a doggedly determined killer from his past on his trail and cold-blooded pirates all around him, Shae’s contract to recover the treasure from a sunken ship seems destined to fail. But other, more nefarious individuals are after that same treasure, and whatever it is, it is destined to change the future of the Iron Kingdoms. Whether for good or ill all depends on who finds it first and who is buried at the bottom of the sea in the end…

Book 1 of The Privateers.