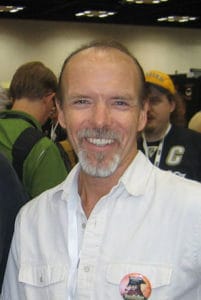 A life-long roamer, Chris currently splits his time between the Caribbean, where he and his wife, Anne, live and cruise on their sailboat, and the mountains of western North Carolina. That’s the great thing about his job—he can write anywhere he can plug in his laptop. During the summer, he delights in attending conventions and meeting with fans. Check out the Events page to see where he’ll be appearing, and make sure you stop by to say hi!